The misleading Data of the E-Mobility Sector

The status of charging infrastructure is a heavily debated topic in Germany. Is there enough? Is it at the right locations? Is public or semi-public infrastructure the right way? A recent article on Statista, based on an analysis of the distribution of high power chagers (HPC) across Germany by the German Association of the Automotive Industry  (VDA) made us recall our analysis of charge point availability in 2021 and the prognosis for the coming 4 years. In the following, we briefly recap the results of our investigations and the how they were made and we take a careful look at charging infrastructure data and their interpretation.

A critical look at the Status Quo

In a first study (status July 2021), we put the  number of registered electric vehicles and active charging stations in relation to each other and showed that the average number of charging processes per charging point and day is at a low of 0.5. The following figures were considered for this calculation: as of July 2021, 439,000 purely battery powered electric vehicles (BEV) were registered in Germany, and 40,000 charging points existed. An average BEVs consumes 2,350 kWh of electricity for an average of 12,000 km of annual driving. And 80% of charging takes place at home or at work, i.e. at non-public charging points. 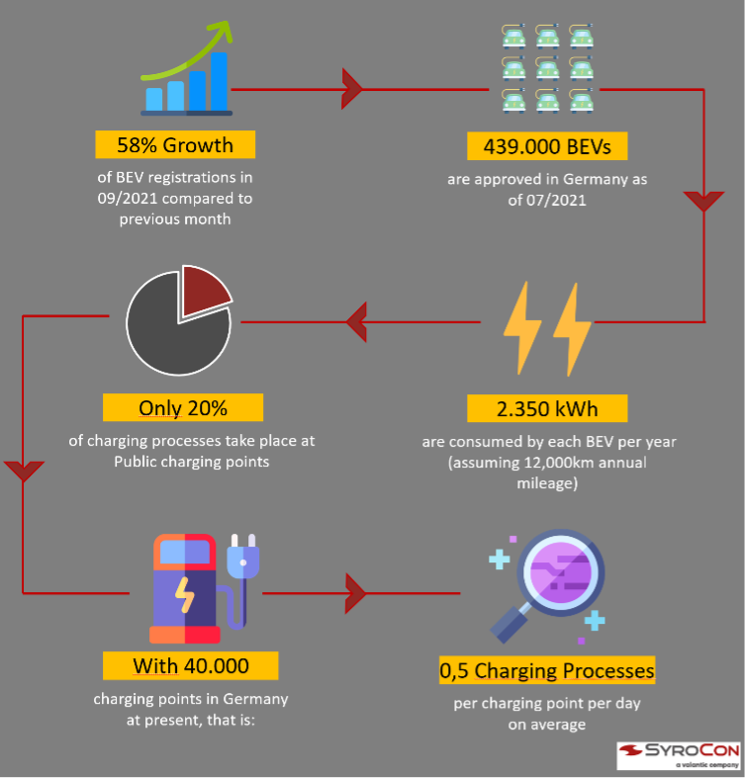 In our analyses, we consider only BEVs, because we believe that no significant number of plug-in hybrid electric vehicle (PHEV) drivers do  bother to charge at public charging stations. And yes, the assumption that charging is distributed completely evenly across all charging stations is certainly highly simplified.

How does that evolve over the next years?

After the status quo analysis produced this surprising result for us, we ventured a forecast of the development of the load on the charging infrastructure. We applied about the same assumptions as above and looked into the year 2025. A number of assumptions were made in the process. For the forecast of the charging infrastructure, we follow a study by Horváth & Partners. According to this study, the number of public and semi-public charging points will increase to around 258,000 by 2025. 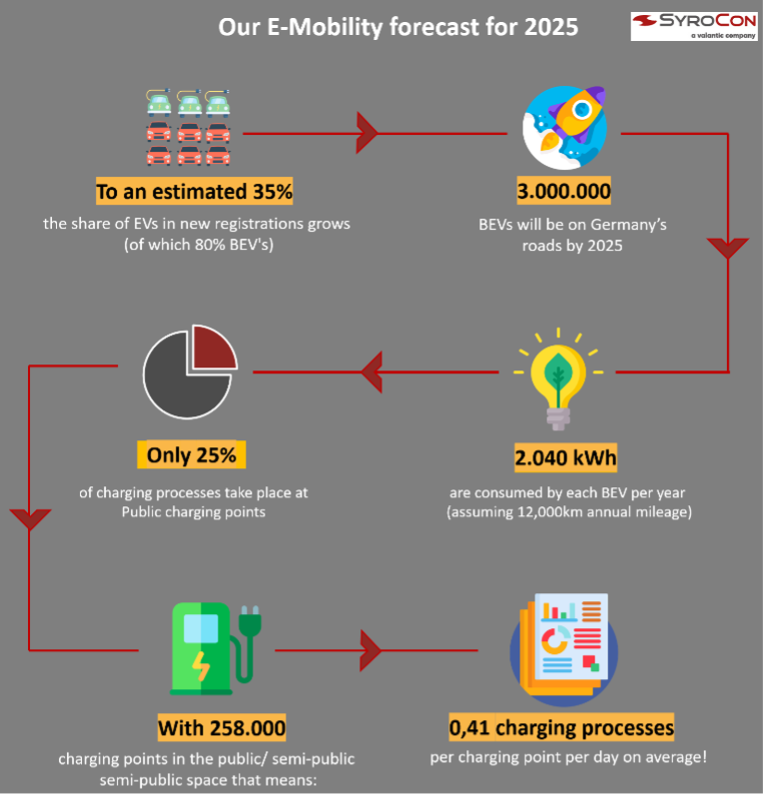 With regard to BEVs, there are a few more considerations to be made. A forecast of the Center of Automotive Management from late 2020 predicted about 480,000 registered electric cars in 2021, with a 50:50 split between BEVs and PHEVs. As of today, this forecast is untenable. As early as July 21, there were 438,950 pure electric vehicles on Germany’s roads. On this basis, we have made the following assumptions:

– Around 3.3 million new passenger cars will be registered each year.

With these assumptions, we forecast a continuous growth of new BEV registrations to 924,000 in 2025 and thus about 3 million BEVs on Germany’s roads in 2025.

Making similar assumptions as in the study of the status quo (12,000 km mileage, 17 kWh/100km, 75% charging at home or at the place of work) and under the – very simplified – assumption that these are evenly distributed across all charging points, 0.41 charging processes per day take place at each charging point.

Now let’s take a closer look at the study „Crowds at fast charging stations“ just published on Statista. According to this study, Germany’s HPC stations are getting crowded. The statistics are based on data from the Bundes Netz Agentur (BNetzA) and analyzed by VDA who calculates the S-Ratio – the ratio between EVs and HPC stations – for each county and city in Germany.

Which data are considered in this analysis? First of all, only fast charging points, i.e. those with a capacity of MORE than 22 kW, are considered. This is actually a reasonable consideration, though it would make even more sense to distinguish between AC and DC charging stations. Even at a 43 kW AC charging station, most EVs charge at lower power, as the built-in charger is usually only designed for a maximum of 22 kW, often even less.

It is also worth noting that all electric vehicles are included in the analysis, including plug-in hybrids. We have already presented our opinion on this above. Assuming that only a vanishing proportion of PHEV drivers charge at public charging points, the number of Electric Vehicles per charging point is significantly reduced from 143 EVs per fast charging point. With a current ratio of BEVs to PHEVs of about 50:50 /2021, estimated 55% : 45% 2022), this number is cut to half.

Apparently, the data VDA is using is not quite up to date. Though we can’t speak for the counties of Plön and Calw – which are considered to be the ones with worst S-Ratio –  but we know the Rhine-Main area quite well.  There, the current numbers seem out-of-date. Other than in the statistics of VDA and BNetzA,which only counts four public fast chargers, charging apps like EnBW Mobility and Plugsurfing provide eight in the Main-Taunus district (Kelkheim: 3; Hofheim: 2; Hochheim: 3). And for the city of Wiesbaden, we were able to find a total of 42 fast charging stations instead of the 20 mentioned by the VDA.

It is also bizarre that some HPCs – such as four each at the autobahn service stations Medenbach Ost & West –  are listed neither in the Main-Taunus district nor with the city of Wiesbaden. These stations, with a capacity of 175 kWh, are not listed in the charging station register of the FBNetzA (as of 01.01.2022) either, which forms the basis for the data.

Can Tesla Supercharges be ignored?

Another point that distorts these evaluations of charging infrastructure to the negative is the non-inclusion of Tesla Superchargers. After all, about 20% of the currently registered BEVs are Tesla vehicles. And Tesla drivers – when on the road – usually charge at Tesla Superchargers. This means that over 1000 fast charging points, at which more than 80,000 Battery Electric Vehicles charge in Germany, are not included in the statistics.

A call for reliable E-Mobility data

In the booming e-mobility sector, it is enormously difficult to present precise and valid data, as the industry is currently in a state of continuous change. Therefore, one should always be critical while looking at specific statistics. We believe that it is necessary to create a much more dynamic collection of electromobility data. Only then it will be possible to make reliable statements and forecasts about electric vehicles, infrastructure expansion, and infrastructure utilization. 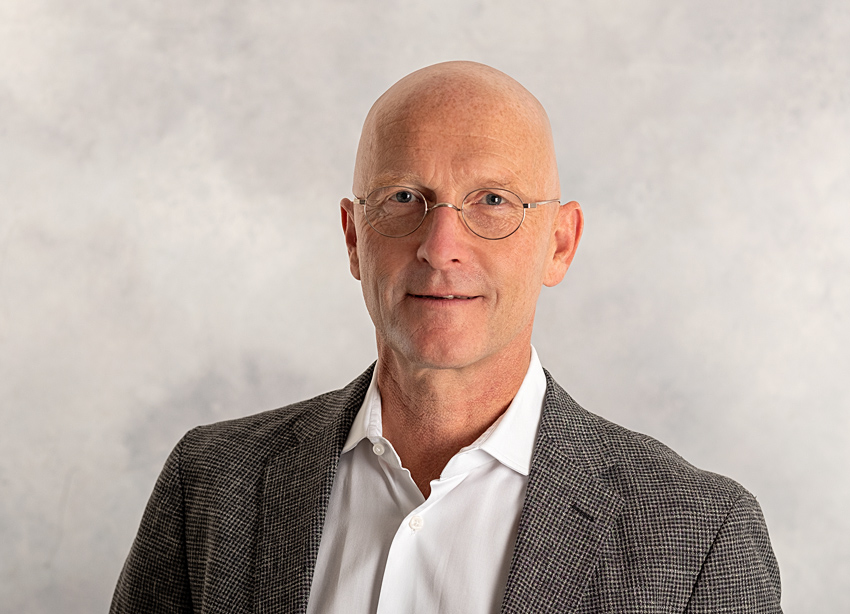 Dr. Markus Eisel studied geophysics at J.-W.-Goethe University in Frankfurt and earned his Ph.D. at Freie Universität Berlin. After his academic career at GeoForschungsZentrum Potsdam and Oregon State University, he started his IT career in 1999 with positions at S.E.S.A. AG and TietoEnator.

Since 2007, as co-founder and CEO of SyroCon, he is responsible for business development, sales and delivery and plays a key role in the company’s growth and strategic development. In his view, Digital Transformation is the way to make companies more successful, and supporting SyroCon’s customers in this is his mission.

„Digitalizing business processes is the real added value that Digital Transformation brings to companies. Creating solutions that achieve this is our mission.”

This website uses cookies to improve your experience while you navigate through the website. Out of these cookies, the cookies that are categorized as necessary are stored on your browser as they are essential for the working of basic functionalities of the website. We also use third-party cookies that help us analyze and understand how you use this website. These cookies will be stored in your browser only with your consent. You also have the option to opt-out of these cookies. But opting out of some of these cookies may have an effect on your browsing experience.
Necessary immer aktiv
Necessary cookies are absolutely essential for the website to function properly. This category only includes cookies that ensures basic functionalities and security features of the website. These cookies do not store any personal information.
Non-necessary
Any cookies that may not be particularly necessary for the website to function and is used specifically to collect user personal data via analytics, ads, other embedded contents are termed as non-necessary cookies. It is mandatory to procure user consent prior to running these cookies on your website.
SPEICHERN & AKZEPTIEREN